Croatia behind the scenes

Discover the treasures of Croatia – its famous attractions and its hidden gems. From the northern hills to the southern Dalmatian islands, a week of leisure, history, tastes, scents and fun. Additional pre - and post - trip offers available. 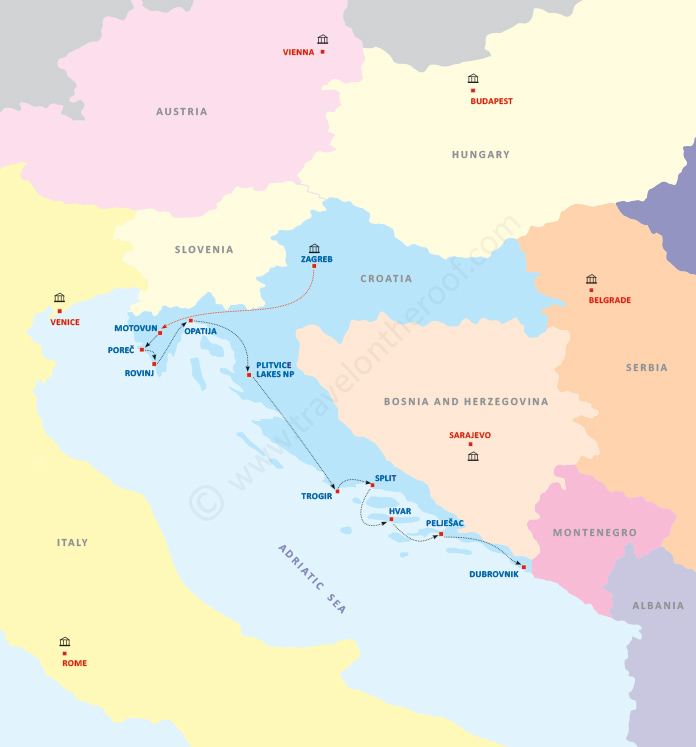 We started this journey in Zagreb, the capital of Croatia with 1000 years of history, friendly people and beautiful parks. Its rich and fascinating Jewish history always surprises us anew, this time being no different.

Taking a morning walk through the ages we begin at 11th century foundation of Zagreb, crossing into the 14th century and the first arrival of Jews to Zagreb, through the golden years of late 19th and early 20th century (when Zagreb developed rapidly) with Jewish community reaching its peak – just before perishing, almost completely, in the Shoah.

We visited Mirogoj, one of the most famous cemeteries in Europe, designed in 1876 by Herman Bolle, including its Jewish section, that tells the silent story of the Zagreb Jewish community. 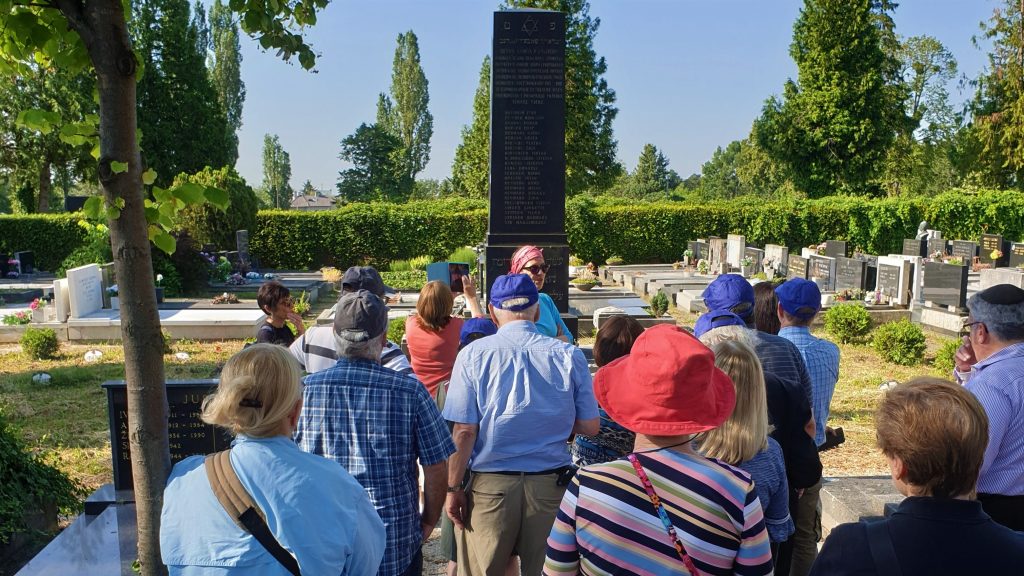 Discovering Istrian treasures such as Poreč was the goal of the day. Poreč’s city plan follows the 2000 years old Roman town, with the famous, 6th century Euphrasian Basilica and its amazing mosaic, designated as UNESCO World Heritage site since 1997. We spent the night in Rovinj, considered one of the most beautiful Venetian towns on the Croatian coast. This colourful place hosts one of the most famous artists’ streets with numerous galleries and stores, presenting original art by local artists. This was a great opportunity to shop for unique gifts and artworks, Good thing is we bought extra strong bags in advance!

And the sunset of Rovinj embracing the horizon was a sight to see that evening. In fact, It always is! 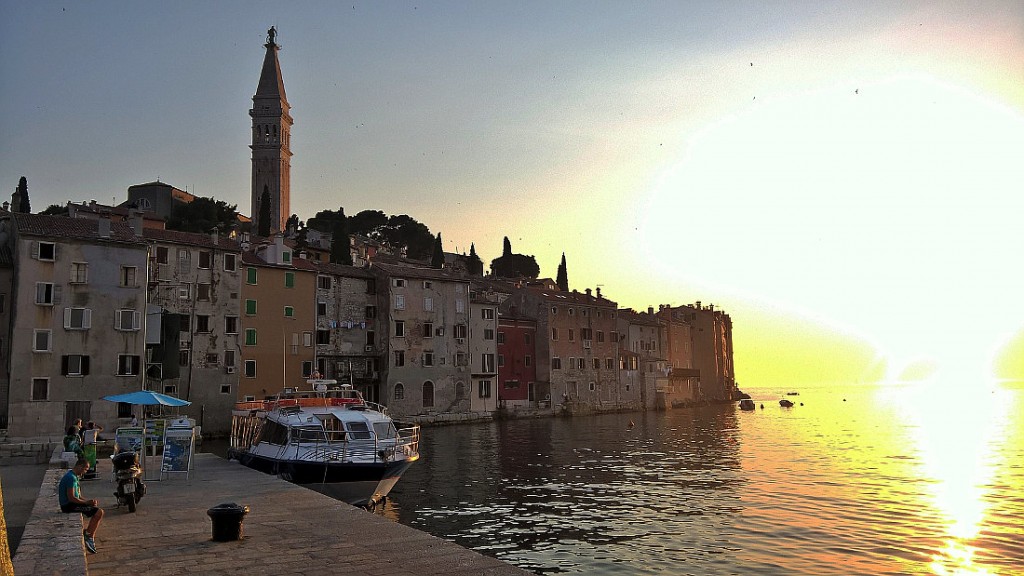 Followed by a lavish breakfast the exploration of the wonderful Istrian countryside was in order. It is often compared to Tuscany, with it’s green landscapes, vineyards, forests and little hill-top towns, such as Motovun or Hum, the smallest town in the world. Leaving Istria for Kvarner in the afternoon, we enjoyed the atmosphere of Opatija, the oldest tourist resort in Croatia. Reliving   its golden years between the two world wars, the time when Austro-Hungarian Jewish aristocracy spent their holidays here, felt like living in several timelines, all of them bursting with understated class and grace.

Coastal beauty of Croatia is only countered with its fascinating natural beauty. Luckily, it’s all quite under your palm here. Before you could say “yalla” we were already in Plitvice lakes National park, an inescapable highlight of touring in Croatia.   Its 16 lakes, numerous waterfalls, a pleasant walk along the lakes in the lush European forest and endless “Kodak moments” all make for what one of our guests called: “the most remarkable chunk of planet Earth, I ever saw”. Zig-zagging back to the coast, the drive took us through some of the most beautiful landscapes and cleanest rivers of Croatia. The day ended on the Dalmatian coast, in Zadar, the oldest continuously inhabited city in the Adriatic, listening to the world famous sea organ, observing the sunset behind Croatian islands. No wonder all one could hear was “wow, wow, wow” into the late hours of the evening. 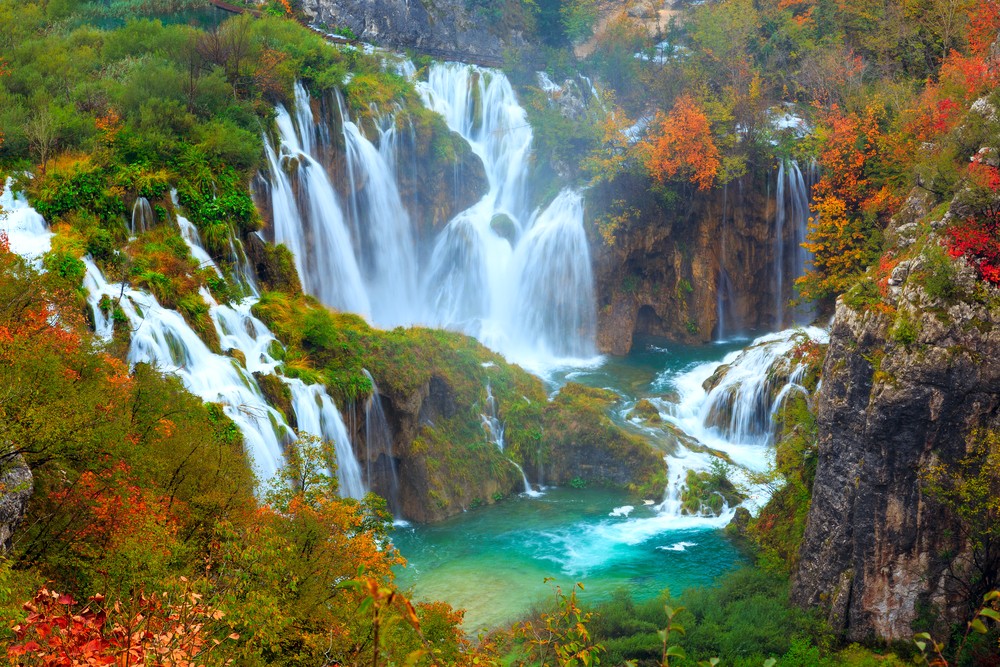 The waterfalls of Plitvice National Park in Croatia

The “wows” didn’t stop coming in during gourmet breakfast and we were already on the road for Split. The rising star in Croatian tourism, Split is one of our favourite spots in Croatia. A lively city with 1700 years of history, that grew from within a Roman emperors’ palace. Jewish life in the city goes back to the 16th century there were two groups of Sephardic Jews made Split their home; the Ponentine (“western”) with its origin in Italy (Split being back then a Venetian possession) and the Levantine (“eastern”) Jews from the Ottoman territories in  Balkans. Both groups later merged into one Sephardic congregation. They were mainly merchants, physicians, and tailors and, thus, in the interest of trade with the Ottoman Empire, they were favoured by the Venetian authorities. 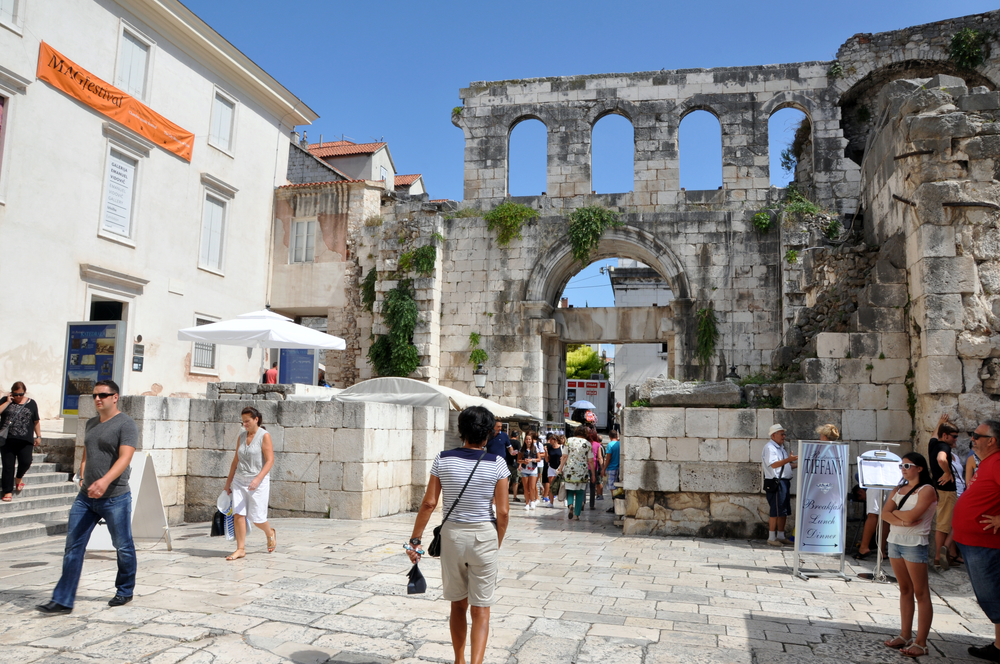 Diocletian built the palace on 305 AD. Today it is the home of most of the city sights like the Basements, beautiful Roman squares and statues, The Bell Tower, Jupiter’s temple, the former Jewish ghetto, the synagogue, the City Museum and many more.

The highlight, however, was a visit to the Split synagogue, built in the 16th century and in continuous use for more than 500 years. Today it is a home to a community of about 100 people. We’ve explored the old ghetto as well as the Jewish cemetery which was founded in 1573 and is located only 10 minutes away from the Old town on the beautiful Marjan Hill that gave a great view over the city and the Split archipelago. 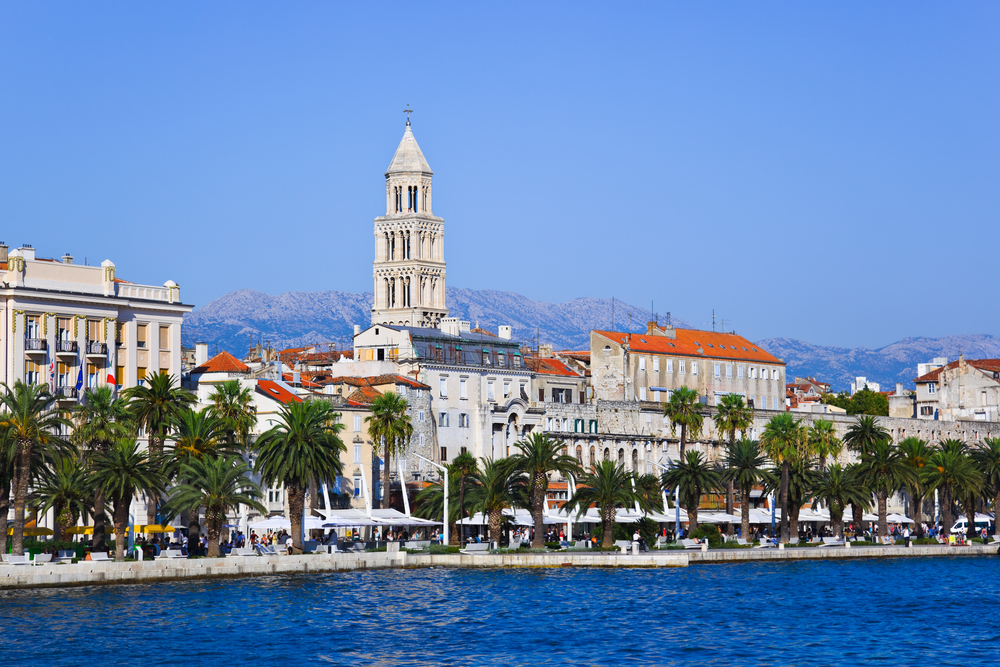 After a 3 hour short ferry ride, we arrived at the famous Island of Hvar. One of the most beautiful islands in Croatia, and by some accounts in the world, is a former lavender capital of Europe. There we strolled through the lavender fields and olive orchards where we learned about lavender and olive oil production crowning the day with the breathtaking view of the Adriatic from one of the island’s highest peaks. The Town of Hvar itself is both an historical and aesthetic treasure, showcasing one of the oldest theaters in Europe together with the most unforgettable sunsets in the world. Rubbing shoulders with numerous celebrities casually strolling through the city without the usual paparazzi flocking around, made our guests feel like walking on the red carpet rolled out for them personally.

Destination--Dubrovnik! But first, we had to drive along Pelješac peninsula, and make a stop at one of the best vineyards in the Mediterranean as we approached the town of Ston with the longest preserved stone wall in Europe and some amazing fresh and dried fruits the region has to offer. Following the drive through the southern Dalmatian coast, with breathtaking views of the sea and the islands, in the late afternoon we arrived at the glorious city of Dubrovnik. Just seeing it from the road beaming with its golden hues and incredible stone textures was enough to put the whole bus into a trance. 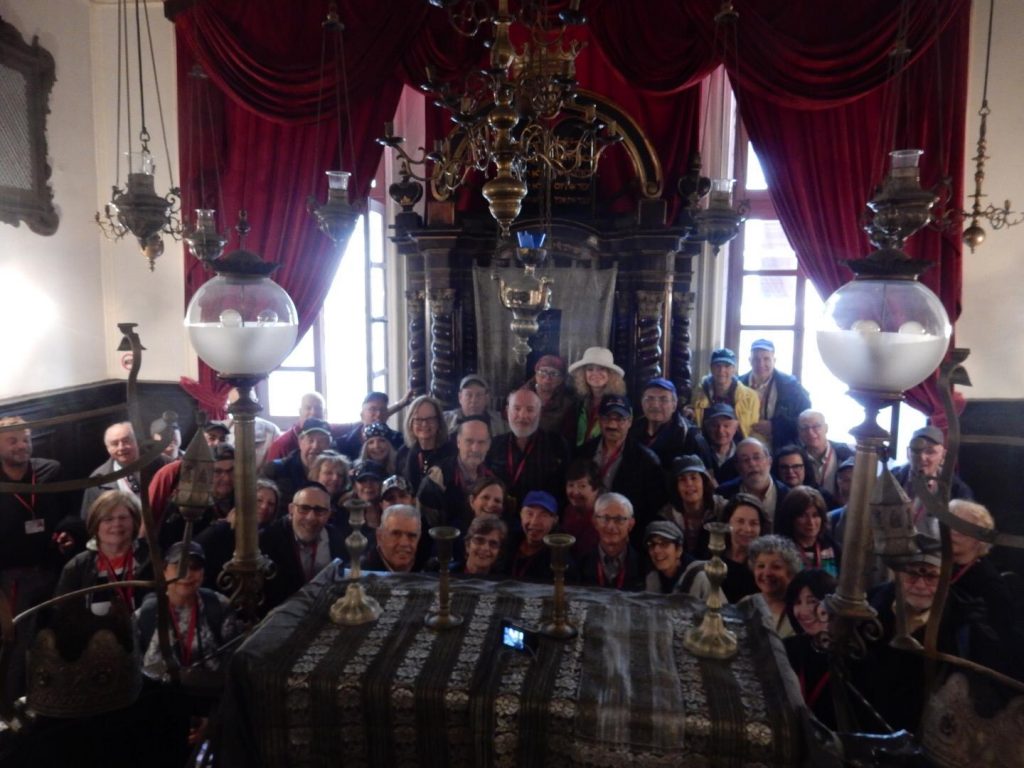 Is there anything better than waking up in Dubrovnik? Well, yes--waking up in Dubrovnik and going on a Jewish tour of the city! Jewish merchants from Albania are mentioned in local archives already in 1368. After the Spanish expulsion in 1492 Dubrovnik became an important transit centre for refugees travelling to Balkan cities under Turkish Ottoman rule. Jews were allowed to settle in Dubrovnik and were given customs privileges to encourage transit trade. They dealt mainly in textiles, silk, wool, leather, and spices, and were allowed to live inside the walls in 1538, but in 1546 a ghetto was established in a small street (still called the Jewish street) enclosed by walls, locking the gate at night. Visiting the Jewish museum, in the second oldest Sephardic synagogue in Europe and showing the invaluable synagogue artefacts of its marvelous past was the peak moment of the trip. Apart from its Jewish past, Dubrovnik is one of the most recognized destinations in Croatia, with rich history and magnificent sights, including the majestic city walls and the unforgettable Stradun, the main street of the Old City. The place with unique and multilayered history, lavish in its beauty and elegance, Dubrovnik is the destination visitors can’t wait to come back to, again and again and again. It enchants you forever, be prepared! 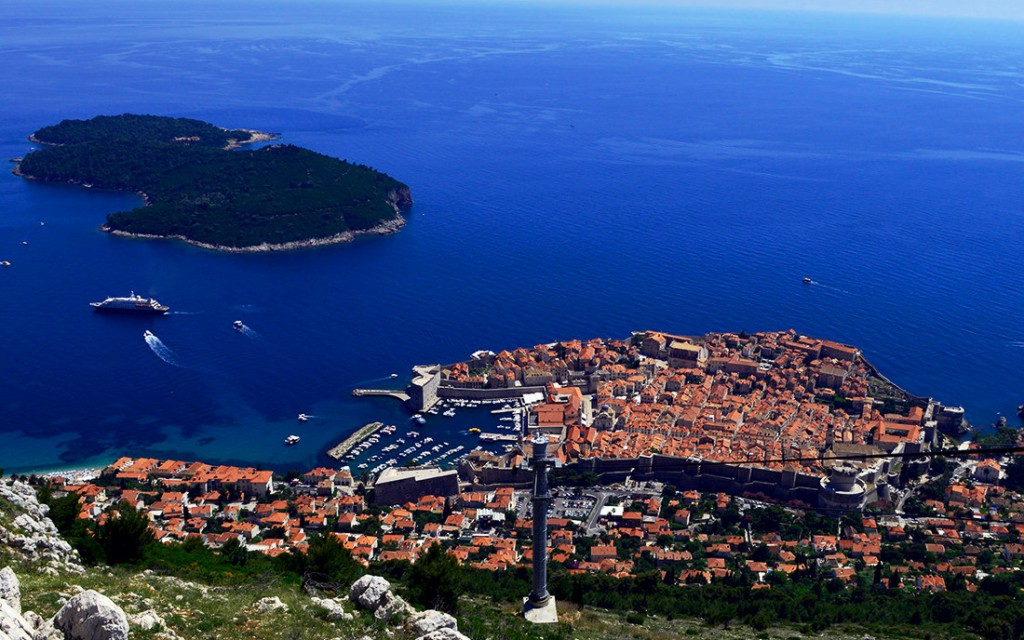 Dubrovnik is unique in it’s beauty, it’s history, it’s mentality, it’s destiny. Centuries of skilled navigation between big, hostile powers, visionary thinking of it’s rulers, daring spirit all left their mark. This is the perfect spot to end your trip to Croatia.