Ljubljana, the charming and vivid capital of Slovenia is one of the smallest in Europe and has also one of the smallest Jewish communities. It is known for it’s Baroque and Art Nouveau architecture and its unique bridges above the Ljubljanica river.

In the Old town we are cross the Dragon Bridge and admire works of 20th century architect Jože Plečnik: the famous Triple bridge and Shoemaker bridge, National library. We will hear what made the conqueror Napoleon to be admired by Slovens and Jews alike.

Will be invited to the Temple by Moses, meet Julia and Romeo, walk through the medeival street Židovska ulica, the remainent of Medeival Jews street. Funicular will take us to the Castle hill, where we will climb the tower to see the spectacular view of the city and surrounding Alps.

Picturesque glims through Roman and medieval past to heroic struggle during the WWII occupation, special Yugoslav Communist regime will bring us to what makes Ljubljana today so remarkable. 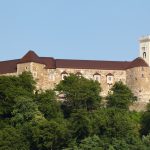 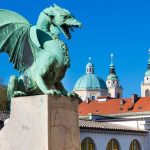