The two rising stars as the European travel destinations, from the Alps to the Adriatic sea islands 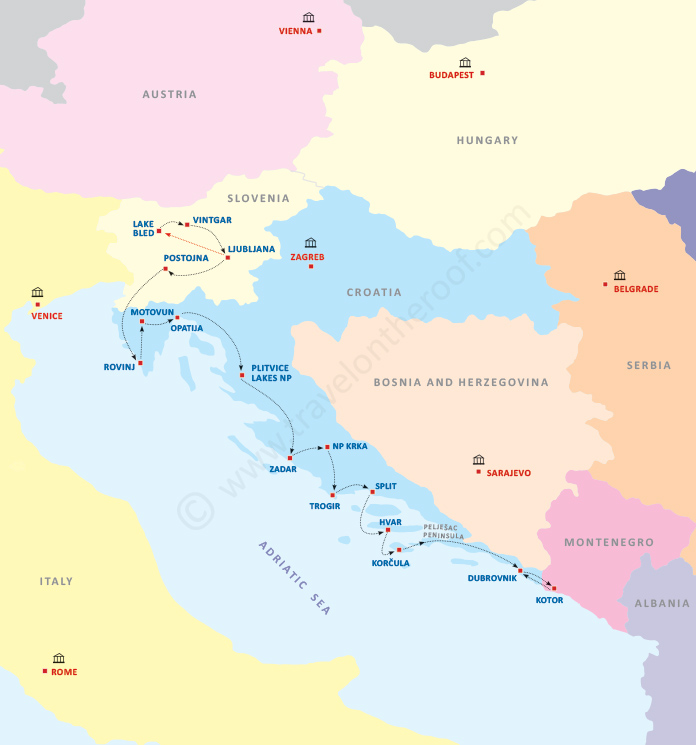 Day 1
Ljubljana is one of the most charming cities in Europe. The old city center, overlooked by an old castle, with the Ljubljanica river slowly flowing through it, offers it’s visitors abundance of architectural and cultural monuments and unique laid-back atmosphere. Street festivals, markets and many languages make Ljubljana a truly cosmopolitan feel throughout the year. 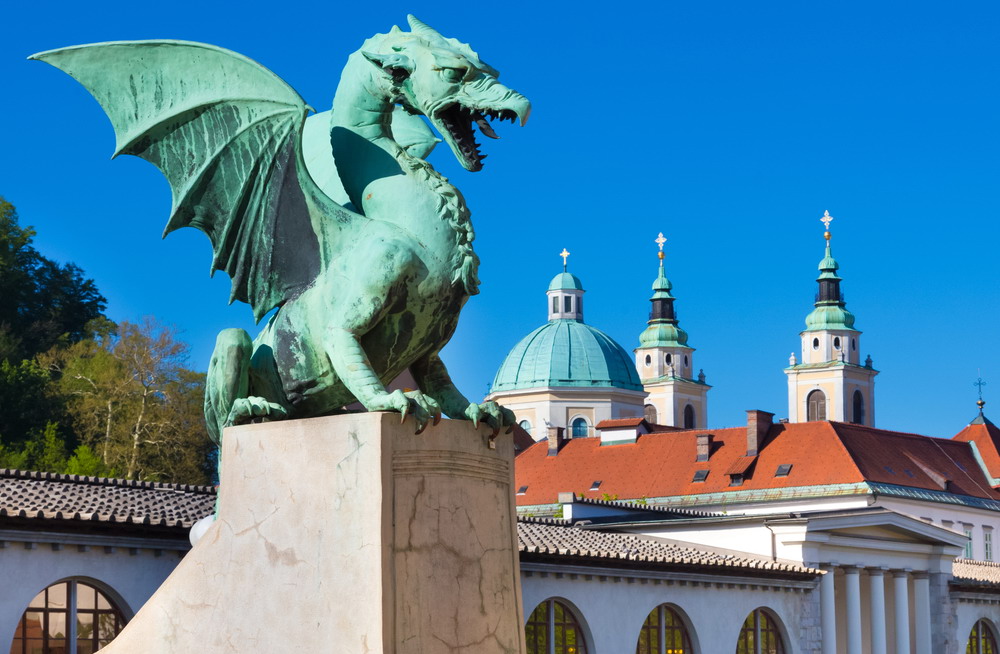 Day 2
Today we explore the beautiful Slovenian countryside, starting at Vintgar canyon, Lake Bohinj, culminating with the breathtaking views of the Alps from the Vogel mountain, at almost 5000 ft (1537m) height. We will visit Lake Bled, a majestic glacier lake, glittering under the Alps, for a perfect afternoon and evening, surrounded by snow covered mountains and some of most spectacular views in Slovenia. Slovenia is one of the smallest, yet one of the most beautiful countries in Europe, with some of the best ski trails in the wintertime. 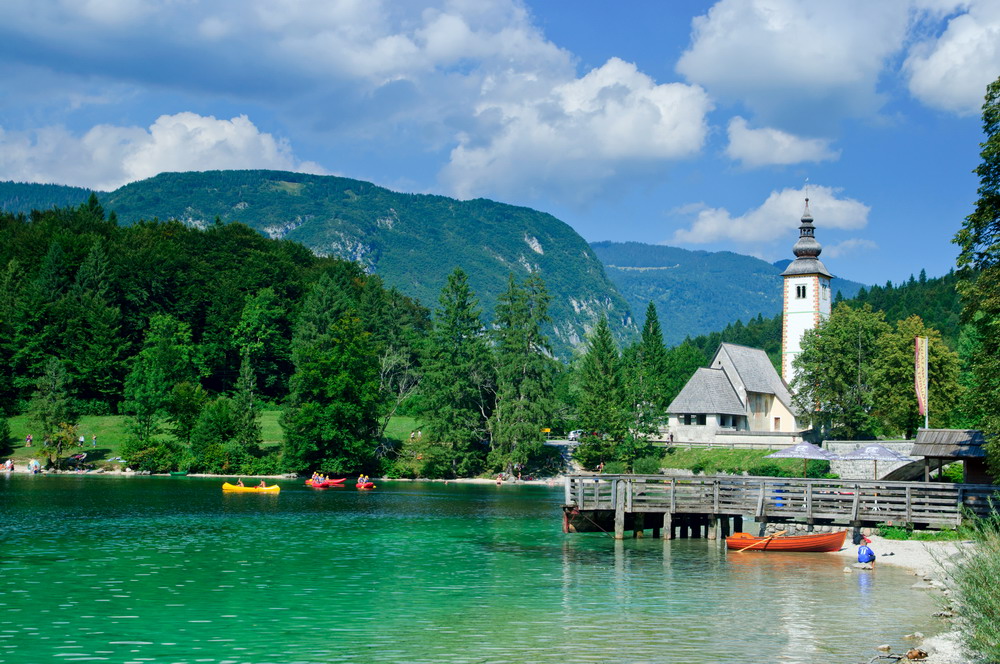 Day 3
Today we visit the Postojna cave, the largest and most visited “carst” cave in Europe, for an unforgettable our an a half experience, deep underground. Timetable permitting, we will experience the Lipica stud farm, a centuries old manor where magnificent Lipizzaner horses are bred and trained. Let’s discover their connection to general George Patton, while here.
Crossing yet another border, we arrive to Rovinj, considered one of the most beautiful Venetian towns on the Croatian coast. This colourful place hosts one of the most famous artists streets with numerous galleries and stores, presenting original art by local artists. And the sunset of Rovinj is second to none… 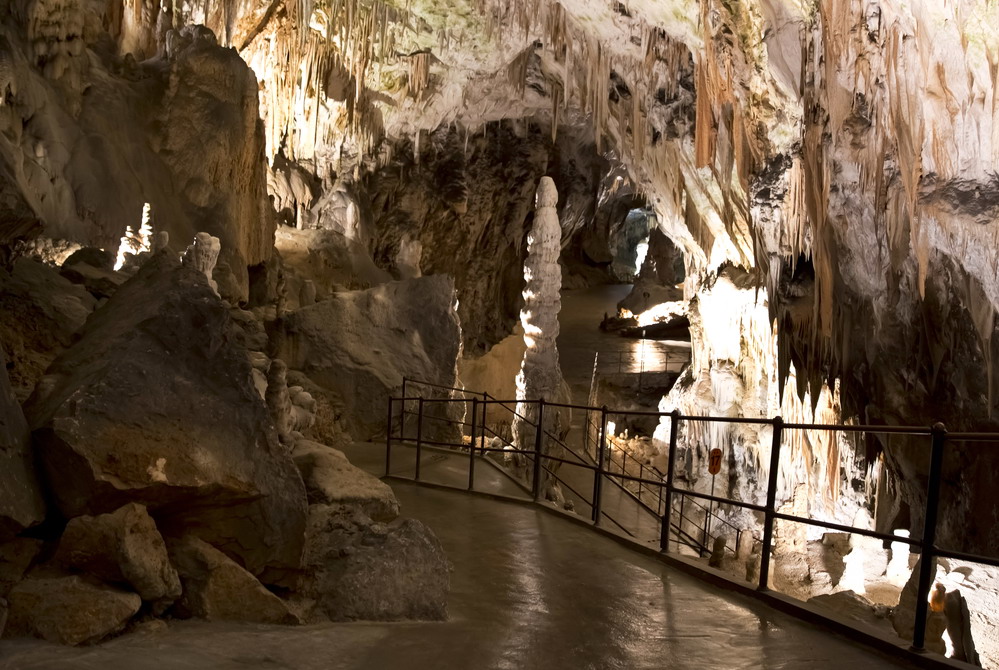 Postojna cave is a more than 24 km long karst cave system, the network of passages, galleries and chambers. In 1872, railway lines were laid in the cave so you drive into the cave by a little tourist train

Day 4
Today we explore the wonderful Istrian countryside, often compared to Tuscany, with it’s green landscapes, vineyards, forests and little hill towns, such as Motovun or Hum, the smallest town in the world. Enjoy the atmosphere of Opatija, the oldest tourist resort in Croatia, and relieve it’s golden years, between the 2 world wars, when Austro-Hungarian Jewish aristocracy used to spend their holidays here.  Late afternoon we will arrive to Plitvice lake National park. 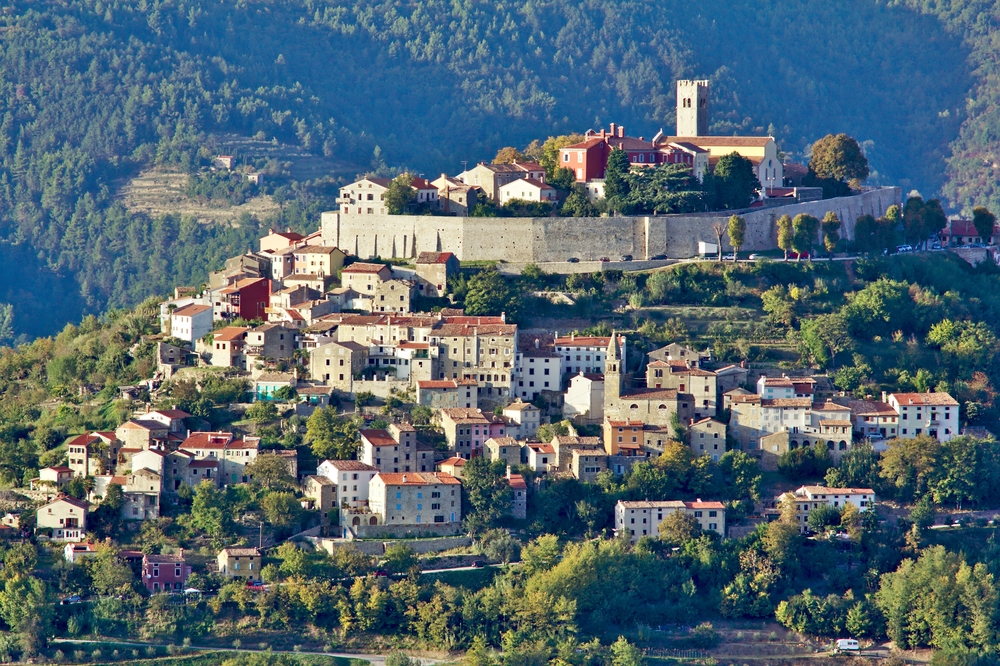 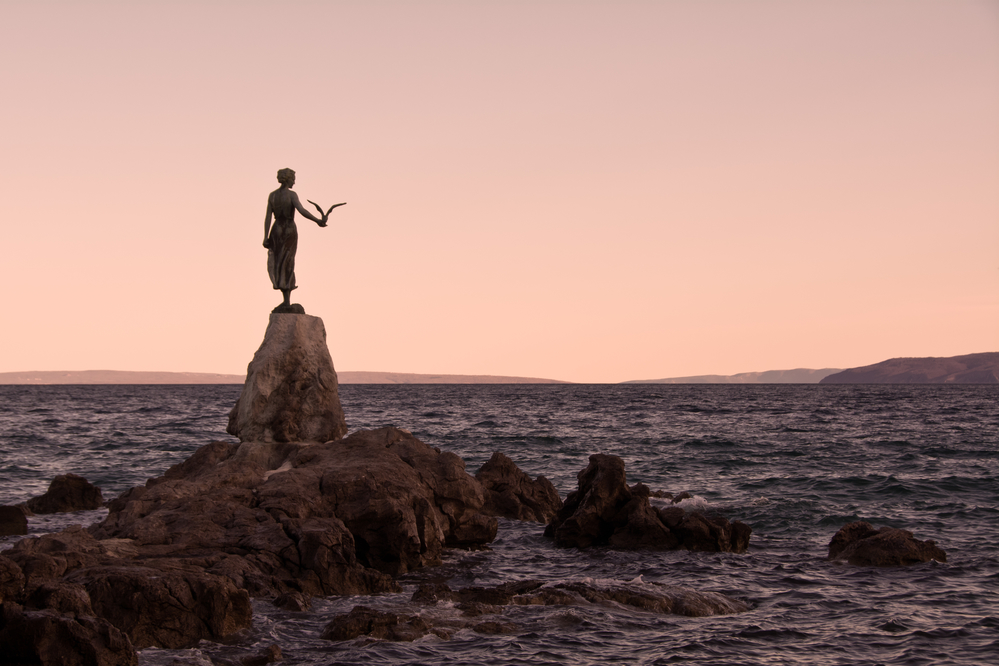 Maiden with the seagull, a statue by Zvonko Car (1956), one of symbols of Opatija.

Day 5
A trip to Plitvice lakes National park is usually one of the highlights on anyone’s visit to Croatia. 16 lakes, numerous waterfalls (how many will you count?), a pleasant walk along the lakes in the lush European forest, endless “Kodak moments”, local food on the road. The drive takes us through some of the most beautiful landscapes and cleanest rivers of Croatia.On the way we will stop at the village of Rastoke, another Croatia hidden gem, with houses and watermills built above the rushing waters of two small karst rivers. Continue to the old Adriatic port of Zadar, continuously settled from pre-Roman times. Zadar is a place where Adriatic history and present mix perfectly, where it’s historic peninsula hosts the famous, modern-day work of wonder The Sea Organ – a perfect background music for “the most beautiful sunset in the world”, as claimed by Alfred Hitchcock. 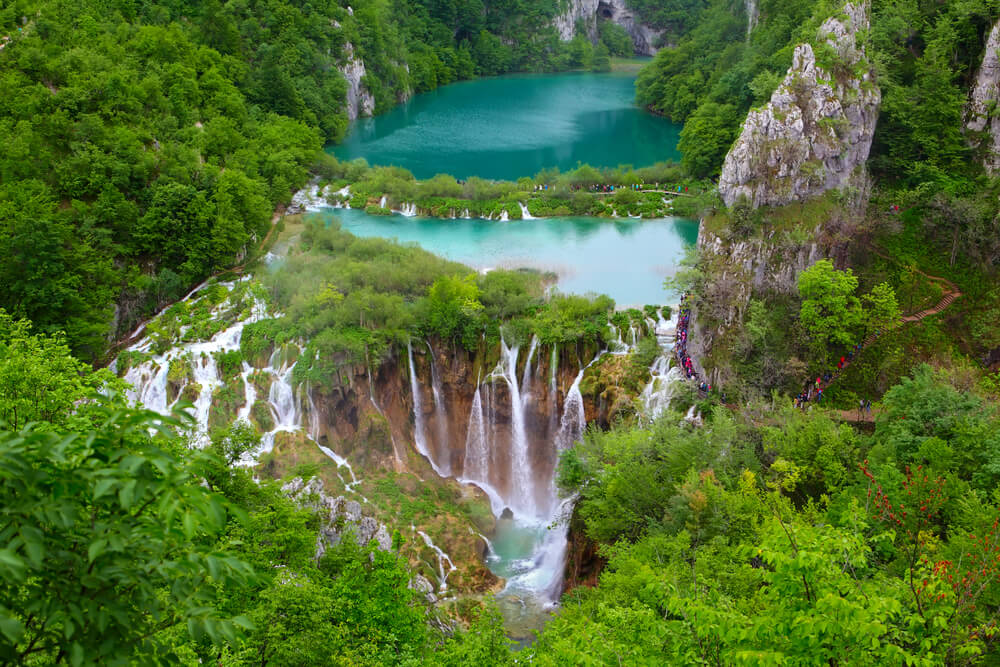 Day 6
Krka national park is another nature wonder in Croatia that attracts many visitors every year. The karst river, rushing through the sediment rock, with beautiful waterfalls and abundant wildlife are a perfect place for a 2 hours nature walk. After we will visit Trogir and arrive to Split,  the second-largest city of Croatia and the largest city of the region of Dalmatia. It lies on the eastern shore of the Adriatic Sea, centred on the Roman Palace of the Emperor Diocletian.

Day 7
After breakfast start with the walking tour of Split, visiting all the important sights that are both stunning and have a historic and cultural significance for the development of the city and the Community. In fact, the general tour of Split cannot go without mentioning the role that the Jewish Community has played in the cultural and economical development of the city.

The tour includes the visit to the 1700-year-old Roman Palace. It is the home of most of the city sights like the Basements, beautiful Roman squares and statues, The Bell Tower, Jupiter’s temple, the former Jewish ghetto, the synagogue, the City Museum and many more. Throughout the Palace there are plenty of details that could keep you occupied for hours. Within few minutes walking distance of the Palace there are a few Renaissance squares, the City Promenade and some interesting markets. A bit further is the Old Jewish Cemetery, up on the Marjan hill, from where you can see the whole city. It takes about 10-15 minutes to reach it.

Day 8
After a 3 hours ferry ride, arrive to the Island of Hvar. One of the most beautiful islands in Croatia, and by some accounts in the world, is a former lavender capital of Europe. Depending on the time of the year, we can visit lavender fields and learn about lavender oil production, have a safari through it’s olive orchards, or simply enjoy the breathtaking views of the Adriatic from one of it’s high peeks. The Town of Hvar is both a historical and aesthetic treasure, not to be missed.

Day 9
We continue our island hopping by sailing to the Island of Korčula, with one of the most unique fortified port towns on Croatian Adriatic. The town of Korčula is also known as the birthplace of Marko Polo, but it’s history and importance stretch back for centuries. One of the finest examples of Venetian renaissance, the town also preserves some of the most unique local traditions in the area.

Day 10
Drive over the Pelješac peninsula, we stop for wine-tasting break in one of the best vineyards in the Mediterranean. Continue to the town of Ston, with the longest preserved stone wall in Europe, and some amazing food in a local tavern. In the afternoon, we arrive to Dubrovnik.

Day 11
Dubrovnik – Jewish merchants from Albania are mentioned in local archives in 1368. After the Spanish expulsion in 1492 Dubrovnik became an important transit center for refugees travelling to Balkan cities under Turkish rule. Jews were allowed to settle in Dubrovnik and were given customs privileges to encourage transit trade. Jews dealt mainly in textiles, silk, wool, leather, and spices. They were allowed to live inside the walls in 1538, but in 1546 a ghetto was established in a small street (still called the Jewish street) enclosed by walls, and the gate was locked at night. Visit the museum, in the second oldest Sephardic synagogue in Europe showing the synagogue artefacts and other items belonging to the past. The well-preserved cemetery contains 200 old gravestones, including that of Rabbi Jacob Pardo, who died there in 1819. Sunset walk along the monumental city Walls are a perfect prelude to evening stroll along Stradun – the main city merchants street. 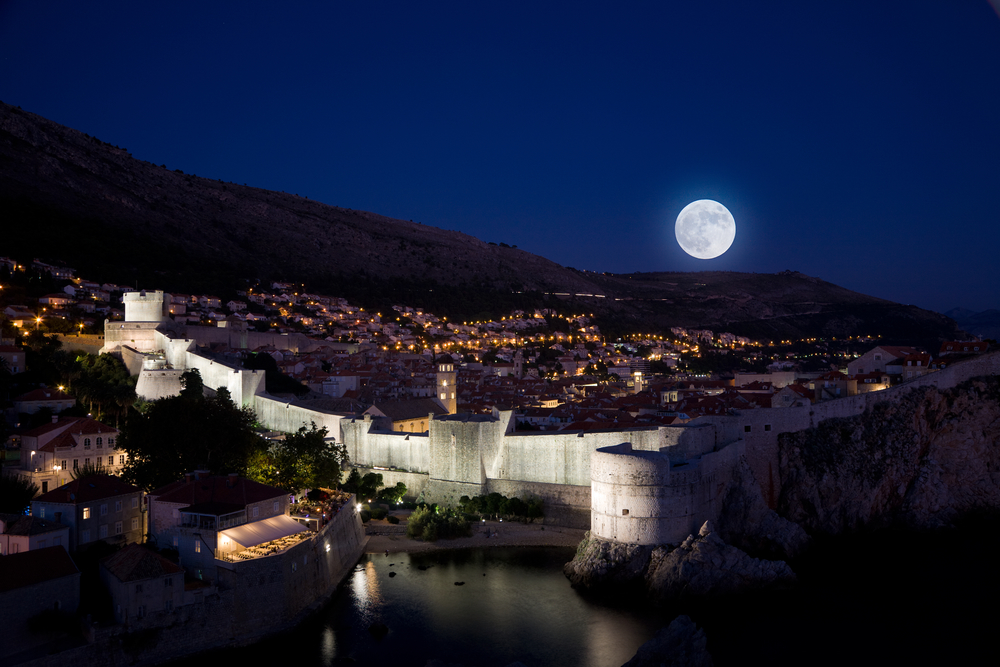 Full moon rising over the old city of Dubrovnik

Day 12
A day trip to Montenegro takes us along the majestic Kotor bay, towards the old traders port of Kotor, hidden beneath the steep Montenegrin mountain slopes, that gave the country it’s name. A one time rival to Dubrovnik and Venice, Kotor has changed many rulers and owners, and a different defensive structures are still overlooking the city. The bravest among us will climb the few hundreds stairs to get to the top of the city walls, with a view that fully justifies the effort. 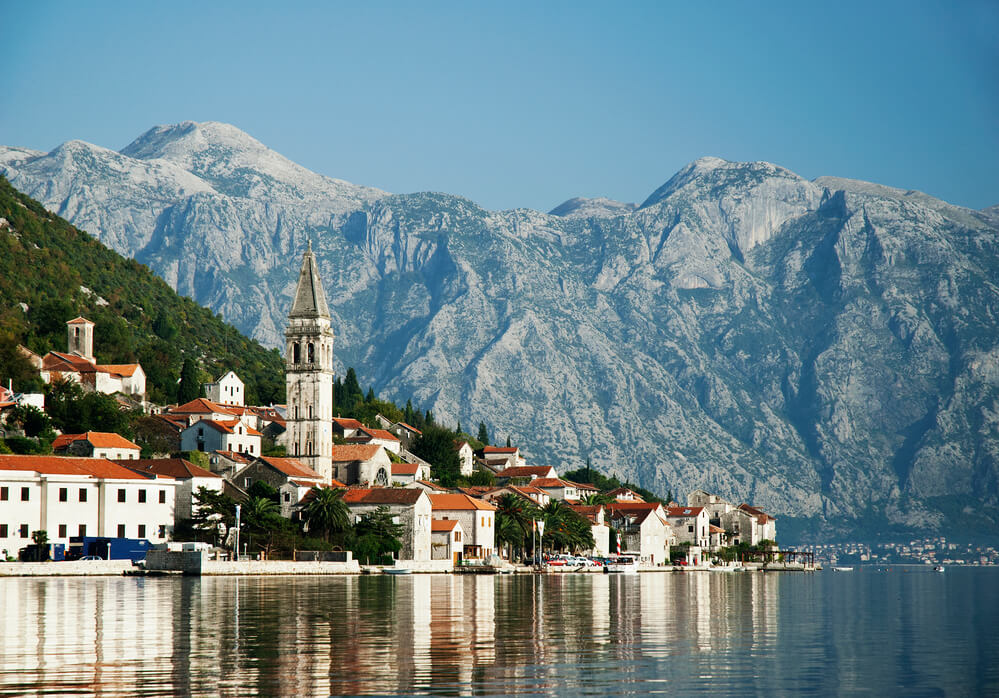